Forbes: The safest country in the world for COVID-19 is now Germany, according to a recently released ranking. Germany is followed closely by New Zealand and South Korea. Switzerland, which was first, has dropped back to fourth. Japan is fifth, and Australia and China are sixth and seventh.

The most dangerous nations?

The Deep Knowledge Group first released a ranking of the safest countries in the world for COVID-19 back in June. Now the think tank has updated its data and methodology and re-issued a report on the safest countries and regions. The ranking isn’t what most people expect: it’s not just about how many infections there are right now, or how many deaths COVID-19 has caused.

Rather, it’s about a complex series of assessments on multiple medical, economic, and political factors. Added up, they increase or decrease a country’s score.

If the previous index is any indication, where a country ends up on the list can be contentious. New Zealand has done incredibly well, as have other countries in the Caribbean and south-east Asia.

According to the report, the point is not so much whether a country has been hit hard by COVID-19 yet or not — although that certainly matters — but also whether there’s political will and social acceptance of quarantine and lockdown measures. Whether the national and local governments cooperate well. If a nation has good monitoring and detection and a strong medical system. And, how vulnerable a country is to economic dislocation due to COVID-19, plus how well equipped a country is to handle emergencies.

“Deep Knowledge Group’s new COVID-19 special analytical case study is designed to classify, analyze and rank the economic, social and health stability achieved by each of the 250 countries and regions included in its analysis, as well as the strengths, weaknesses, opportunities, and threats or risks that they present in the battle against the global health and economic crisis triggered by COVID-19,” the group says.

All told, Deep Knowledge Group says they looked at more than 140 parameters and considered more than 35,000 data points, both up significantly from June’s report.

Here are the 100 safest countries, according to their report:

“As vaccine research advances it is becoming more crucial to have in place a more thorough analysis of the spread of virus and various levels of success at prevention and recovery,” Deep Knowledge Group says. “We are only just now emerging from a period of a spontaneous and widespread cessation or reduction of economic activity. Not all devastation wrought on the health and wealth of the global population [is] seen yet.” 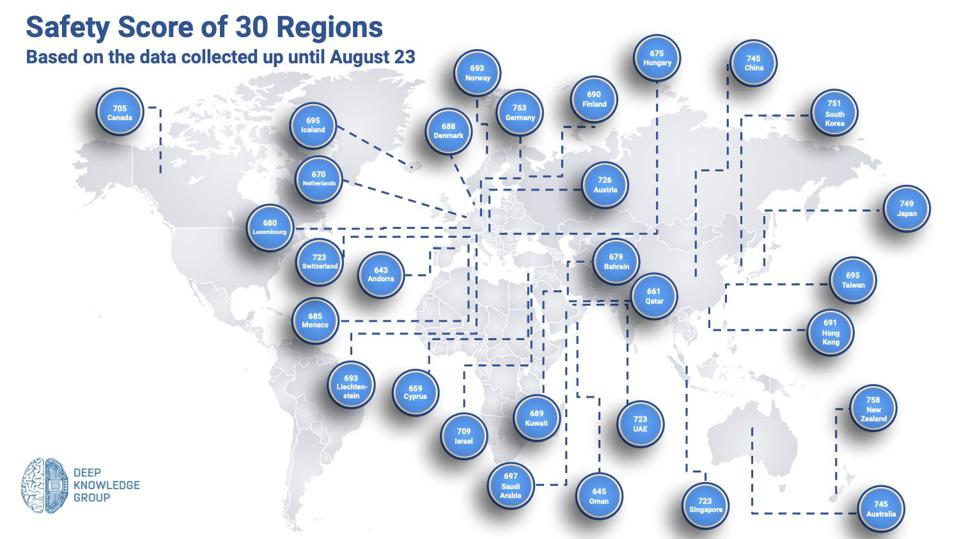 Why does the United States score so low?

The United States, according to the Deep Knowledge Group, is “infused with a libertarian ethos,” and is not responding well to calls for lockdowns or mandatory face masks. Also, it’s politically decentralized, and therefore there’s a significant diversity in how different states are treating the pandemic, as well as a clear lack of coordination.

While Canada and the United States had similar patterns of infection early in the crisis, the report says, the two countries quickly diverged later on in the pandemic.

“With their numbers having remained similarly low and insignificant until March, it only took a few days for daily growth in the United States to approach 50%, so that in less than a week the total the number of cases was 5 times greater than in Canada, and 5 days after that it was 10 times greater,” the report states.

One positive in the U.S.: slightly lower death rates.

One major success story in South America is Uruguay. It’s the only country in the region that is still open to travel to European nations, and has much lower rate of infection and a low level of COVID-19 deaths as well.

“It is a high degree of social responsibility of its citizens and authorities, that impedes the spread of pandemic,” the report states. “A national health emergency, with associated measures, was declared after the first four deaths, which lead to a much lower number of total incidents in absolute measures and per 1 million of population, as well as to a more or less low level of mortality, despite the fact that 15% of people in Uruguay are 65 years of age and above.”