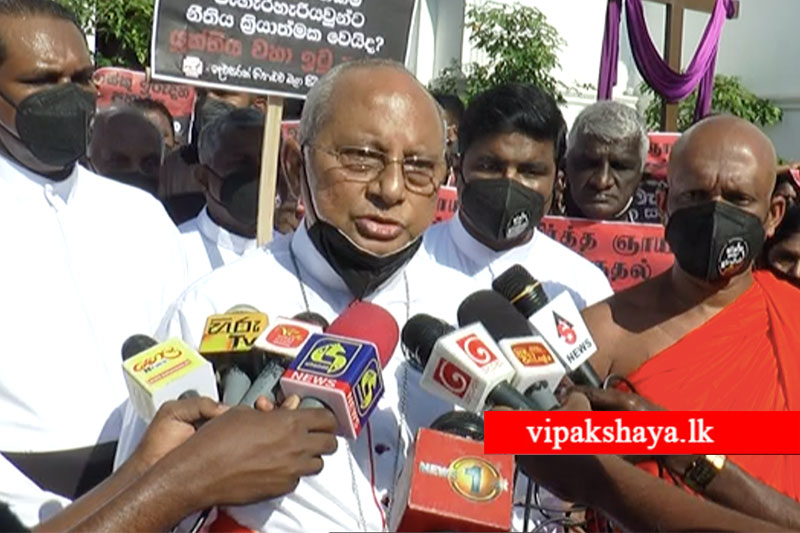 Archbishop Cardinal Malcolm Ranjith says he will continue to protest until justice is done for the victims of the Easter attack.

He mentioned this speaking a peaceful protest in front of St. Anthony‘s Church in Kochchikade carried out in parallel to the ‘Black Sunday’ protest declared by the Archdiocese of Colombo.

The Catholic Archdiocese of Colombo declared today as a ‘Black Sunday’ against the lack of justice for all those who died and were affected by the Easter attacks.

The Archbishop said, “We are holding this protest in the hope that justice will be done. We wanted the commission to find out who was behind this attack. We do not know to what extent it has been activated. I am reading that report these days. There are many things that can be enforced, especially the implementation of the law against the perpetrators.

My belief is that the government should be more committed to conducting an honest investigation. I wonder if it was necessary to appoint the six-member committee. What is needed here is for the President to carry out what he directly has to do on a practical level. It would be wrong to choose only some of them [the perpetrators] and punish only them.”

Cardinal Malcolm Ranjith further said that they will continue to carry out this protest campaign until they receive a definite sign.

He added that other religious organizations will also be involved in the campaign as it is an issue that affects all people in the country.

Meanwhile, several monks of the National Bhikku Front had also joined in the protest.