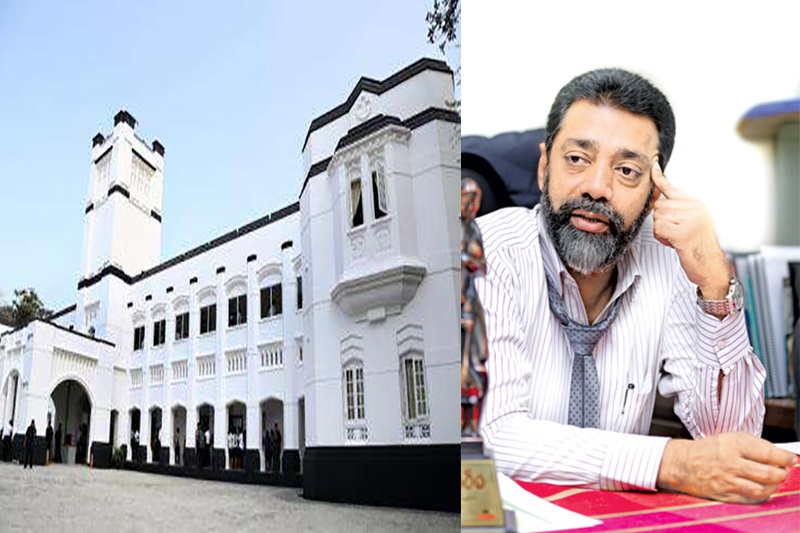 a well-known academic, researcher and who is also a  well-known and a popular actor from the posts he held as the Professor and Dean of the Faculty of Graduate Studies of the University of Visual and Performing Arts. This surprising decision was taken abruptly without any justification and implemented with immediate effect without holding any preliminary and formal inquiry or without even waiting for the confirmation of the minutes of the meeting.

This sudden decision was based on an ambiguous interpretation and wrong perception that Professor Saumya Liyanage had not completed his postgraduate qualifications within a period of eight years as a probationary lecturer.  In fact, having received a Bachelors degree from the University of Kelaniya (BA 1994/ 1998) and subsequently receiving a Postgraduate degree in Creative Arts (Master of Creative Arts 2001/2003) from Flinders University Australia, Professor Liyanage was appointed as a probationary lecturer at the University of Visual and Performing Arts on 02.02.2007.

Subsequently, keeping with university norms, Professor Saumya Liyanage obtained paid leave from UVPA and commenced his academic research towards a Ph.D. in La Trobe University in Australia which he completed and submitted his Ph.D. Thesis on 30th September 2014. It should be noted that on that date the Faculty of Graduate Studies of La Trobe University had recommended the award of a Ph.D. degree to professor Liyanage, subject to minor corrections in the thesis. Accordingly, as required he had submitted his Ph.D. thesis to La Trobe University well within the stipulated time of 8 years of his probationary period. This information is available on the Internet for anyone to examine. Accordingly, his Ph.D. is valid for the year 2014.

After the submission of his Ph.D. thesis, he returned to UVPA and resumed duties However, surprisingly after a period of five years, taking into consideration a purported technical error in a letter received by UVPA as a reply to a letter sent to La Trobe University by the then Senior Assistant Registrar/Academic establishment, Chani Imbulgoda under the direction of the Registrar. This unjust and sudden action has been initiated and belatedly acted upon without any justification (I.e. In 2020) doing a disservice to Professor Liyanage unjustly removing him from his posts of Professor and Dean.

Instead of correcting an error caused by the UVPA administration, severe action has been taken suddenly by removing Professor Liyanage from his academic and administrative positions putting the blame on to him which he is not responsible for.

It is to be stated that the practice of the universities in Sri Lanka is to consider the date of submission of the thesis as the valid date for confirmation or promotion provided that there are no major corrections in the thesis. Some foreign universities however consider the effective date of validity as, the date annual convocation held or the last date of the academic year or the date of submission of a corrected thesis by supervisors, depending on the tradition of the particular university or the country.

However, this sinister move was opposed vehemently by several other members of the Council such as Dr. Indika Ferdinando, Dean of the Faculty of Drama and Dance, Dr. Eranga Samindini Weerakkody, of the Faculty of Music, Professor Emeritus Mrs. Kusuma Karunaratne, Mr. Chandrasena Maliyadda and also by Luxman Abeyasekera who were also the external members appointed to the same council by the University Grants Commission. It should be noted that usually whatever is decided by the previous council has to be recommended or disapproved by the next session of the council before its implementation. What is surprising is that this unjust and illogical proposed was approved and implemented on the same day namely on 09-22-2020, the day 175 council was held, totally not adhering and violating the accepted norms of the university councils in Sri Lanka as though approved by the majority of the council members.

It needs to be stated that all the members who voted for this move hold no doctorates. Unfortunately, the Competent Authority Professor Emeritus W.M. Abeyratne Bandara has no PhD and he has only a M.A and has become a professor after working as a lecturer in the faculty of Management studies at the University of Sri Jayawardhanapura. He has not worked as a Dean or Vice-Chancellor before becoming a competent authority of University of Visual and Performing Arts. In the same way, Mr. Jagath Ravindra, the Dean of the visual arts or Mr.Chiltus Dayawanse, the Dean of faculty of Music, or Mr. Suneth Priyaaravinda do not have PhD qualifications, though all of them are senior lecturers.

For a considerable time, it is well-known especially at the UVPA there has been harboring prejudices and opposition to academic staff with Ph.D. qualifications especially obtained from foreign universities.

Senior Professor Dr. Sarath Chandrajeeva who was also a well-known sculptor and Artist of Sri Lanka who brought professionalism and new reforms to the university of visual and performing arts was removed from the post of Vice Chancellor by former president Maithripala Sirisena, without any inquiry a year ago by the pressure brought by such groups who are anti-academic and anti-reformist.

The unjustified removal of Dr. Saumya Liyanage is the latest sinister move implemented by interest groups who do not want progressive reforms to improve the academic quality of the university of Visual and Performing Arts keeping with the proposed new university education reforms envisaged by also the present government of Sri Lanka. Unfortunately, the present Competent Authority who himself has no Ph.D. to his credit has joined the bandwagon gullible and has succeeded in removing a highly qualified academic namely, Professor Saumya Liyanage from his posts of Professor and Dean denying the services of such highly qualified academics to one of the universities in Sri Lanka which has a dire need for such qualified people.